After months of work, countless user conversations, and a great team effort we’re happy to announce the release of DreamFactory 3! This is undoubtedly the most exciting release in several years, addressing a great number of customer requests and addressing numerous important enhancements.

This release is ready to be cloned via GitHub. Docker users can spin up the 3.0 release made available via our Docker repository. You can also take the new release for a test drive via our new hosted service! Head on over to https://genie.dreamfactory.com to start your free 14-day trial.

So what can you expect to find in this release? Let’s break it down!

DreamFactory’s interface has long been perfectly functional yet decidedly utilitarian in design. Version 3.0 marks a radical improvement to the administration console’s visual appeal while taking care to not require existing users to reorient themselves. This is the first step in a series of exciting UI/UX improvements we plan on making in the coming months to ensure DreamFactory is the most user-friendly API management platform in the universe. Here’s a glimpse of the shiny new UI:

By the way, the beta version of this new UI coincided with the launch of our completely redesigned website https://www.dreamfactory.com/. Be sure to check it out if you haven’t already!

Many if not all of our users are required to adhere to strict internal data compliance and governmental regulations. Compliance must be balanced with the ability to effectively build and manage APIs, and so in response to paid user requests we’ve added support for restricted administrators. This feature allows root administrators to identify with a great deal of specificity what parts of the platform a restricted administrator can access. This is done using the simple point-and-click interface presented in the following screenshot: 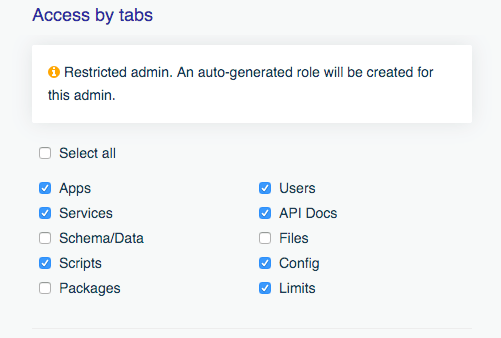 Keep in mind this doesn’t just limit UI access! Because the companion web-based administration client is itself making API calls to the platform, these restrictions are applied at the API level, ensuring curious or nefarious colleagues aren’t able to circumvent their defined privileges.

Like the UI changes, this is just the first in a series of improvements we’ll be making to administrator security. In the coming months we’ll be adding authentication geofencing, among other features intended to enhance security.

Also by request of several users required to follow data privacy laws such as GDPR and POPI, we’ve added the first iteration of API lifecycle auditing. This feature persists the timestamp and administrator identity associated with API creation, modification, and deletion. Like the restricted administrator feature, we’re very excited about this new capability and plan on dramatically expanding it in the coming months to include API activation review and approval.

DreamFactory has long supported four scripting engines, including NodeJS, PHP, Python, and V8JS. Scripting support is undoubtedly one of DreamFactory’s most popular features, not only because it’s used to add business logic to API endpoints, but also because you can create entirely new APIs using the Scripted Services connector. To put the popularity of this feature into perspective, we are aware of at least two users who are running more than 400 scripted APIs within their DreamFactory environments!

In version 3 we’ve updated Python support to include version 3 due to the forthcoming conclusion of support for Python 2.7. The End of Life date is slated for January 1, 2020 so we wanted to be sure our users have plenty of time to begin porting their scripts to version 3. Note we are not removing Python 2 support! We’ve supplemented this support with Python 3 to ensure users can choose from both options as companies transition from version 2 to 3 in the months (and realistically, years) to come.

DreamFactory can interact with thousands of of data sources and third-party services, and for this reason developers have done so many amazing things with the platform. But installing and configuring all of the necessary drivers can be pretty intimidating process. Our Docker environment goes a long way towards alleviating these issues however understandably not everybody is using Docker so we wanted to ease the installation process for other users.

The result are two (soon to be 4) new installation scripts found in the installers directory. These installer scripts are used in conjunction with Debian and Ubuntu, and install all of the dependencies you need to run DreamFactory! If you’re running one of our commercial editions, the installers will additionally assist in the installation of the Microsoft SQL Server and Oracle drivers!

Updates to the GitHub, GitLab, and Bitbucket Connectors

There’s nothing particularly exciting to talk about here, other than we’ve additionally done quite a bit of maintenance work on the source control connectors, refactoring code and upgrading the Bitbucket integration to support the latest API release.

In this release we made the difficult decision to move the MySQL, MongoDB, and Scripting connectors to our paid edition. We are a very small team, and in 2018 alone have put thousands of hours into improving the platform. The overwhelming majority of these improvements are found in the OSS edition. However these three connectors consume an extraordinary amount of support resources, and so we’ve moved them to the commercial edition in order to be financially able to continue supporting them. Of course, DreamFactory 2.X users are able to continue using these features.

If you have any questions or comments about the DreamFactory 3 release, our hosted environment, or anything else feel free to contact us at [email protected].

Jason Gilmore
W. Jason Gilmore is DreamFactory's CTO. Prior to joining DreamFactory, he spent almost 15 years as a consultant and developer for a wide variety of organizations around the globe. Jason is the author of almost a dozen books on web development, including most recently Easy Laravel 5, and Beginning PHP and MySQL, 4th Edition. He's the co-founder of the CodeMash Conference, one of the largest software conferences in the Midwestern United States. Jason serves as a technical advisor to the boards of several United States-based technology startups. His off hours are spent playing with his kids and reading.