Part 1: Running Microsoft Server 2012 and SQL Server on AWS, on my MacBook Pro

How do we get from here, hosting an AWS Microsoft SQL Server instance on my MacBook Pro?

Let’s get to the nuts and bolts of this.  In the past, it was very difficult to create cross platform solutions.  With the advent of cloud computing, this has become increasingly easier to do.

When you have a robust piece of middleware software, such as DreamFactory which is for most intents and purposes language and platform agnostic, you really do have your choice of platforms to install it on.  Each has its advantages and disadvantages, which I am not going to go into detail in this article, but suffice it to say, there are a lot of enterprises that choose the Microsoft platform(s), and some of those advantages became apparent as I worked on this post.

First things first, make sure to grab all of the pre-requisites you need to make the install easy:

At a minimum, you will need the following software and extensions installed and enabled on your system in order to successfully clone and install DreamFactory 2.12.0+.

Microsoft Server can be spun up almost anywhere now, as is evidenced by the photos above, and since DreamFactory is platform agnostic, we can install it on the Microsoft Server 2012 R2 instance with just a few bits of software installed to get up and running. There are multiple ways to grab and install PHP on a Microsoft platform, but an easy way is to utilize the Web Platform Installer (version 5.0 as of this post).

You can download the Web Platform Installer for IIS here. Select a PHP version (7.0.x is required to run the current 2.13.0 version of DreamFactory), and different pieces of IIS, should you decide to utilize that as your production web server.  This post will not dive into the nitty-gritty of IIS, but you can see our documentation here.  We will be using PHP’s built-in development web server to just illustrate the connections.

Once you have installed PHP and double checked your pre-requisites are installed, you can begin the install:

This will pull down the master branch of DreamFactory into a directory called ./dreamfactory.

Otherwise, run the following command to install the dependencies:

With our instance running now, we can finally delve into the “fun” part of this install.  The ease with which you can add a SQL Server instance is awesome.  It is the fastest install I have ever done from the driver install to DreamFactory connection, it was less than 5 minutes¹.

Using the Web Platform Installer, you can download a SQL Server driver package that is compatible with your PHP version and your O/S version.

Now you can head back over to your instance and create a SQL Server service.  Just select the service type, add in your credentials and then test it.  That’s it.  No muss, no fuss.  Take a look at the screenshots below to see the results.

We have now connected our SQL Server instance to our Microsoft Server 2012 R2 (both hosted on AWS) on my MacBook Pro.  Sometimes, it all falls into place.  Don’t forget to check out our wiki and community forums for more topics, information, and examples.

¹ I had my credentials on hand in a notepad text file for copy/paste quickness, but still, very fast 🙂

Note: We have updated the instructions here to match our DF-Docker repo instructions.  This will pull the latest GitHub repo now.

DreamFactory can be run as a Docker container, which makes it easier than ever to get the backend for your apps up and running. The DreamFactory Docker image is available on Docker Hub, or you can build your own image from the GitHub repo. Using these two methods, I’ll show you how to use Docker to fire up your own DreamFactory instance in just a few steps. This setup uses MySQL for the system database and Redis for the system cache. The basic idea is that you first start the containers for MySQL and Redis, then a container for DreamFactory which links to the others.

END_OF_DOCUMENT_TOKEN_TO_BE_REPLACED

Over the years, we have used a few different cloud providers to host DreamFactory Developer Sandboxes. Every single cloud provider uses different terms and concepts for basically the same thing – compute, storage, transfer, gateways, and DNS routing, just to name a few. Having recently made the switch to the Oracle Bare Metal platform for our API Automation Portal, our team was immediately impressed by cost, performance, and ease of use.

END_OF_DOCUMENT_TOKEN_TO_BE_REPLACED DreamFactory is a high performance request/response engine for REST API Services. You can hook up any SQL or NoSQL database and instantly get a comprehensive REST API for that data source. A big part of our platform is the support for JSON Web Tokens. JWT is an open standard for representing session information that is transferred between the client and server. JWT allows DreamFactory to run in a completely stateless manner, which makes the platform very easy to scale vertically with additional server capabilities or horizontally with multiple instances between a load balancer. END_OF_DOCUMENT_TOKEN_TO_BE_REPLACED Twilio has a superb API for integrating SMS messages into your applications. It’s easy to add Twilio as a remote HTTP service to any application you’re building with DreamFactory. DreamFactory lets you securely store your Twilio authentication credentials, call the Twilio API directly from a DreamFactory session, and easily add role-based access control to any Twilio API endpoint. This brief tutorial shows you how to add Twilio to DreamFactory in five minutes.

END_OF_DOCUMENT_TOKEN_TO_BE_REPLACED

One of the most powerful features of DreamFactory is the ability to write server-side script in pre- and post-process events and use as a custom scripting service. This provides the ultimate flexibility and allows the platform to support all sorts of complex backend business logics. However, DreamFactory server-side scripts are stateless and their scope is gone once the original process is completed.

To allow for more flexibility in server-side scripts as well as to add a quick way of storing key-value pair data, DreamFactory 2.3 introduces the ‘Cache’ service. The Cache service supports three different types of cache backends.

Once the services are configured, all three types of cache backends use the same REST API interface to read, write, update, and delete the key-value pair data. Cache Services are native services of DreamFactory and are supported by features like role-service-access, lookup usage, live API documentation etc.

You can configure and use a cache service in a standalone way to store any number of key-value pair and retrieve them as needed. This allows you to easily implement a server-side caching system for your client apps. But the real benefit of cache service can be realized in server-side scripting. In your DreamFactory server-side script, you can make API calls to your cache service just like you do that for any other services. This will allow you to temporarily or permanently store any data related to your script. This can later be used in another script/process or even inside your client application.

Let’s take a closer look at this new Cache service and it’s usage. You can configure/provision a Cache service just like any other services using the DreamFactory Admin console -> Services tab.

To learn more about the configuration, please see the wiki page.

Once you configure a DreamFactory Cache service, head over to the swagger API Docs by selecting the ‘API Docs’ tab on the Admin console. Your newly provisioned Cache service should now show up on the list of services there. Select your cache service to expand it. This will show you all the available APIs for your service. You can expand each of this API to get further details on their usage.

If you are interested in getting your API calls in a timely manner you can leverage Redis for consistent speeds. To do so you just have to follow a few simple steps.

First you will want to enable Caching for the Service you would like cached and set the amount of time each cached response is allowed to last. 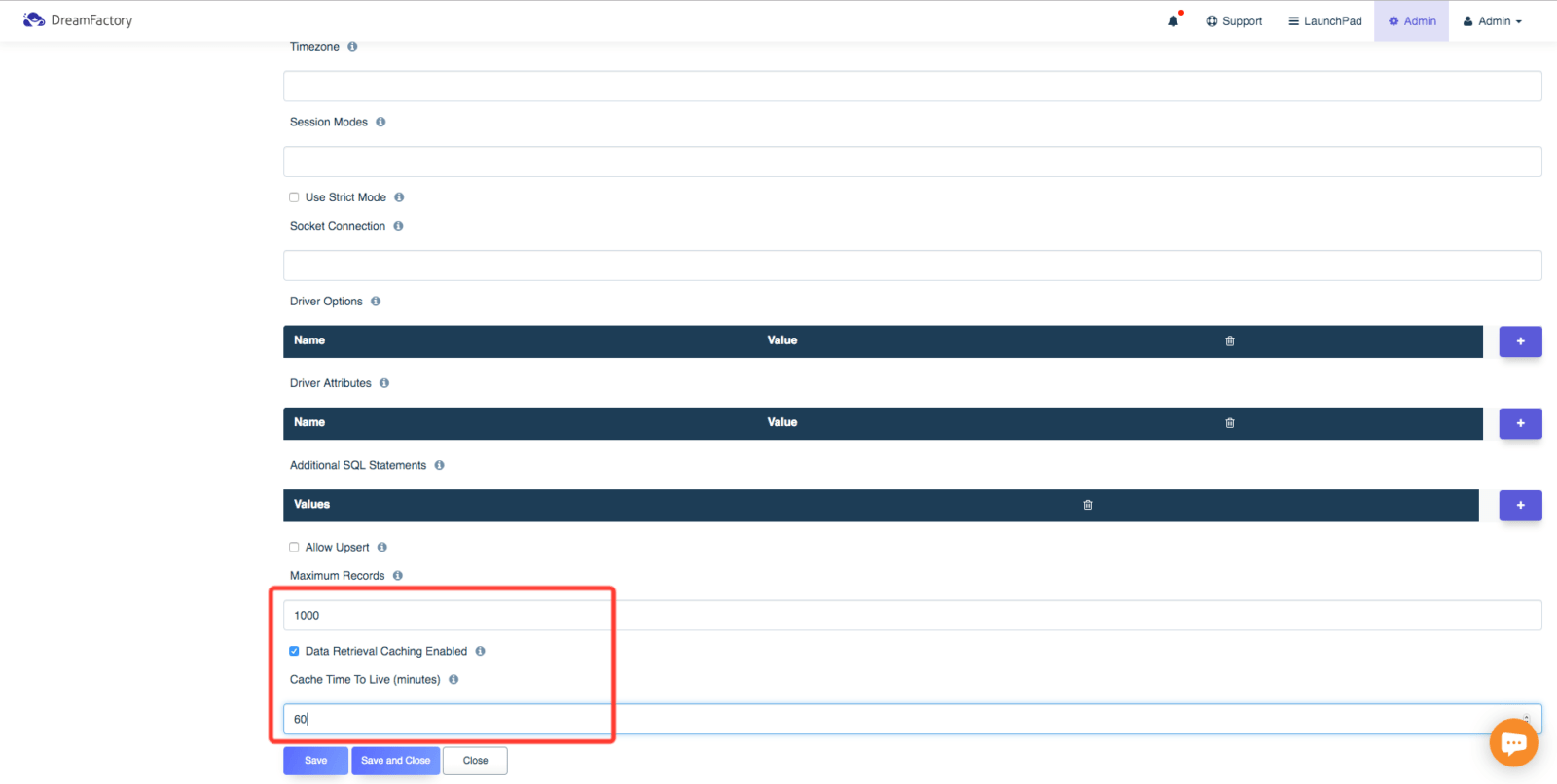 
Believe it or not, that Service is now being Cached. Confirm it in your Redis environment and never worry about slow response times again! Chat with an expert today or try out a free instance to see how easy it is yourself.